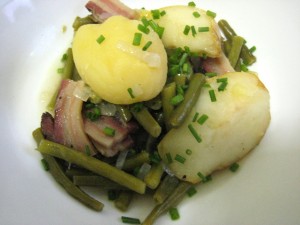 A regional specialty from the north, Birnen, Bohnen und Speck (literally: Pears, Beans and Bacon) couldn’t be easier to make. It is one of those dishes, where I wonder how it first occurred to people. The answer may lie in the fact that green string beans and the small sour cooking pears are harvested around the same time in late August. So why not cook them together? The smokiness of the bacon ties the savory and sweet flavors together in this traditional weekday meal.

(Straight to the recipe.)

Birnen, Bohnen und Speck is what is commonly referred to as an Eintopf – one of many dishes prepared in one pot (hence, ein Topf) and served as a weekday lunch. Oftentimes, potatoes are cooked with the beans and pears, but here I’d suggest departing from the Eintopf-principle. By the time your potatoes are done, your beans would be pretty mushed.

You should be equally careful with the pears. In Germany, small hard cooking pears are used for this dish. In America, I try to find the least ripe pears and cut them in half or quarters, depending on their size. But those pears will be soft in an instant. This really is the biggest challenge of a simple dish – keeping all the ingredients intact for a nice texture that structures the experience of tart, sweet and savory flavors. And speaking of savory, the secret ingredient is an herb called summer savory. If you can’t find it in your store you can do without, which I have done before.

Fun fact: Germans believe raw string beans are poisonous. My American family insists this is a superstition and after a long and heated debate I finally looked it up. I would say it is a superstition with some scientific foundation. Uncooked green beans are mildly poisonous, but as a grown up you’d have to eat A LOT of them to experience any harm. 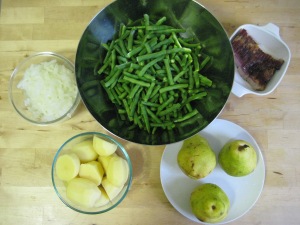 Prepare all your ingredients: Wash the beans, cut off the ends or any bad spots and cut them in reasonably sized pieces (say, 2” long). Peel the potatoes and cut the larger ones in half. Dice the onions and wash the pears. Cut the bacon in slices, about 1/3” thick.

In a large pot, bring 4 cups of water to a boil with the stock cube and simmer the bacon slice for 15 minutes. Take the bacon out of the water and put aside in a bowl.

In a separate pot, boil the potatoes in salt water for about ten minutes, until they’re half-cooked, and put them aside.

Add 2 tbsp of vinegar and the savory to the bacon water and bring to a boil. Put in the onions and beans and boil for about a minute. Add the potatoes, salt and pepper to taste and let everything simmer for another 5 minutes.

Cut the pears in half or quarter (depending on size), remove stems, blossoms and seeds. Put them on top of the beans together with the bacon pieces and simmer for another 5 minutes. At this point, the beans should still have a bit of a bite to them, the potatoes should not and the pears should be slightly soft but not mushy.

Serve in large bowls. On a bed of beans and bacon, place a potato and a pear or two. Finally, pour some of the delicious bacon broth over it.

One thought on “Pears, Beans and Bacon”