No matter where we currently are in the world, food seems to be a reliable way to connect us to where we’ve come from. But sometimes we choose to forget. An exploration of family history through a forgotten dish that begins in a German household in Silesia and ends in “The World’s Borough” of Queens.

No matter where we currently are in the world, food seems to be a reliable way to connect us to where we’ve come from. Recreating our favorite and familiar dishes can make us feel at home, but there’s also a quite tangible dimension to this. We establish connections to the place we call home by browsing specialty food stores for that one special ingredient, by calling our families or writing letters and asking to be sent recipes, spices or even cookbooks. For those living in a country of immigrants, all of this sounds familiar. But what if there are none of your people left where you came from? This is what happened to my grandmother, when, still a teenager, she left her native Silesia with her family and 3 million other people to resettle in Western Germany after WWII.

The Silesia of my grandmother remains an unknowable world to me – despite the many times I have asked her. How did they live? What was their dialect like? And what did they eat? After their resettlement to the West, my grandmother knew to assimilate to the regional customs of her new home. On top of having had to leave everything behind, the expellees now were made feel unwelcome by Western Germans unwilling to share with the newly arrived millions of refugees. Being different wasn’t desirable in a situation like that. 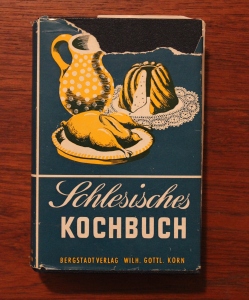 In our family, the post-war expulsion never had been a big discussion topic. I can only assume that the complex of German collective guilt for the war, painful memories and nostalgia was too much to deal with on a frequent basis. And life had to move on. But this also spared our family from the often conservative milieu of the regional associations of expellees that far into the 1980s refused to acknowledge the eastern border of Germany and the loss of their property.

But how do we then connect to a place that exists only in the past? If you know me, I suspect you have an idea what I’m about to suggest. Food. The idea came to me when my sister gave me a Silesian cookbook for Christmas. Printed right after the war by an expellee publishing company, it featured quite a few strange foods. One especially struck my eye. It is called Silesian Paradise: a combination dried fruit and smoked pork, served with potato dumplings. Last weekend, I decided to give it a try.

I have yet to talk to my grandmother back home and find out if this really is a food she remembers from her childhood. For me, it was a completely new experience – and quite a good one. But setting up the dinner table at our home in Queens, I thought about the paradisian aspect. For me, this was a meal not about an ideal or mythical or even a concrete geographical place one can be expelled from. It was about the here and now. I had bought the meat from my favorite Croatian butcher in my neighborhood. I had made pretzel dumplings – my personal signature dish – and now my Greek-American partner and I were at our dining table, overlooking the skyline of the Upper East Side of Manhattan. That’s what food is about for me: the infinitely fascinating cultural heritage and diversity that we can find within us and around us – if only we choose to acknowledge them.

Step one. Soak the fruit with the cinnamon in two cups of water for a couple of hours. Move them around every now and then, so they’re equally exposed to the water.

Step two. Bring four cups of water to a boil in a saucepan and simmer the meat in it for about an hour. Then add the fruit with the soaking water. The fruit, especially the apples, will be pretty soft already, so there’s no need to boil this extensively. Just let everything heat up equally and have flavors develop for 10 minutes. To serve, cut up the meat and thicken the sauce just a little with corn starch dissolved in water.

Pretzel dumplings. These are not specifically Silesian. I serve them pretty much with anything – duck and red cabbage, pork roast and sauerkraut, you name it.

Step 1. Cut the rolls into small cubes – about half the size of a cent or so. Put in a bowl and pour over the hot milk and toss around a little and let cool.

Step 2. Over low-medium heat, caramellize the onion. Add to the bread cubes together with the parsley and eggs. Using your hand, mix everything. Really, don’t hesitate to use your hand. In fact, squeeze this dumpling dough between your fingers for a while, to make sure everything is equally moist. Sometimes, it gets too sticky. Then I add breadcrumbs – a tbsp at a time until you have firm dough. Season with a little nutmeg and pepper. If you’re using pretzel rolls, you might not even need to add any more salt. 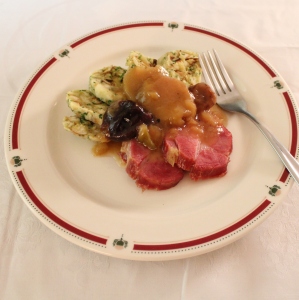 Step 3. In a large pot, bring saltwater to a boil – like when you’re making pasta. Shape six round dumplings. Getting some cold water on your hands will make them stick less. When the water is boiling, turn it down so it’s just on the brink of boiling. Keep the dumplings in there for 15 minutes.

Serving. You can serve the dumplings in whole or cut them up in slices like I did for the Silesian Paradise.

2 thoughts on “Silesian Paradise and New York Reality (with Dumplings)”