Pflaumenmus, Latwerg, Powideln, Schmootsch – the many names for this almost black plum preserve point to its long history in the various regional cuisines across the German-speaking space and Central Europe. Despite of these strong roots in local culinary traditions, many households have dropped plum butter from their canning and jam-making routines. It doesn’t have to be this way…

(Straight to the recipe.)

As I mentioned in my praise of the Zwetschge, this thick and sweet preserve is one of the most popular uses of the fruit. It could be called a plum version of the American apple butter and is made of a few very simple ingredients, most importantly plums. The Zwetschge is probably one of the most flavorful options, but I’ve done a couple a test runs with so-called Empress Plums as well as prunes with good outcomes. 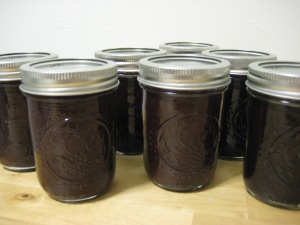 Only a small amount of sugar is added. Some recipes use very ripe plums and no sugar at all. The secret is that the fruit need to be boiled for hours on end, until the preserve has the consistency of a thick sticky sauce and a dark purple color. In the past, huge copper pots were used and constant stirring prevented the sugary mass from burning. As communities joint efforts to prepare their Pflaumenmus, Powideln etc.,  plum season became a social event.

Another option is baking plums and sugar at a low temperature in the oven. Regardless of the method, we are talking about six to 12 hours, which bring us back to why many people prefer the store-bought versions. It’s neither energy- nor time-efficient to fire up your oven and keep an eye on your Pflaumenmus for basically a whole day. To me the prospect of having the oven running the whole day when it’s already hot in our little New York kitchen makes this method of preparation additionally unattractive.

The slow cooker provides a good alternative. 12 hours on high with the lid propped open so the steam can escape will do the trick. You can check in every now and then to witness the stages of Pflaumenmus-formation with its changes in color, texture and smell – from the fresh grass-green aroma of the whole fruit beginning to wilt to the caramel-like steam of the finished product. The experience of how simple ingredients transform into a whole new kind of food is what makes reviving a (now surprisingly simple) culinary tradition a worthwhile endeavor. That’s what cooking is about for me – enjoying not only the finished product but deriving pleasure from observing how it develops.

After simmering for about 12 hours, two pounds of plums will yield about 12 to 15 ounces of preserve. So plan accordingly! It’s great to have a few jars for the winter – not only to put on your bread (A good sourdough bread with butter and Pflaumenmus is heavenly!). You can also use it to fill pastries and dumplings. And a jar of your own plum preserve always makes for a good gift.

Pflaumenmus, yields about 12-15 ounces. Multiply accordingly based on your amount of fruit:

Halve and pit the plums. Put them in a large bowl, add the sugar and leave in the fridge over night. This will allow for the sugar to dissolve and some juice to form. This way the plums will boil more evenly the next day.

The next morning, pour everything in the slow cooker. Start early in the morning, or you’ll be up late canning fruit preserves. Depending on what slow cooker you have, set it to medium or high. The plums only need to simmer continuously. I set mine to high and nothing has ever burned. Put a wooden spoon under one side of the lid, so the steam can escape.

As the plums simmer, check in and stir about every hour or so. After 8-10 hours, most of the fruit will have dissolved – except for the peel. I suggest using the immersion blender to cut everything in small pieces.

Add the spices and rum for the last two hours. (If you leave the spices in for too long, the Pflaumenmus will turn bitter.) At this point, you should also taste the preserve to see if it needs more sugar. Keep in mind that it should still have some tartness to it, so don’t add too much – ideally just one tbsp at a time.

The Pflaumenmus is ready when it is dark purple and you can draw a line in it with a spoon. Fill the hot preserve into Ball jars and process as usual.

One thought on “Transitions of the Plum”